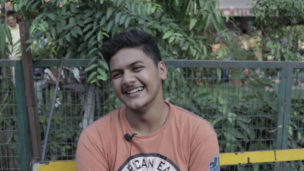 William Shakespeare once said, “Life’s but a walking shadow, a poor player, that struts and frets his hour upon the stage, and then is heard no more; it is a tale told by an idiot, full of sound and fury, signifying nothing.”

We went out to interact with young India asking them to describe what their life or zindagi was like. Of the most nihilistic answers that we received, one was by this young man who believes his life is like the rope that’s tied to a well, “jisko ghiste rehte hain, ghiste rehte hain.” Another young woman says her life is like the chain that’s tied onto the wheels of a bicycle. “Every time the chain comes off and I make mistakes, I get scolded by my parents and learn new things.” Yet another young man believes his life is like a never ending road that continues to go on and on and he never arrives at the destination.

There were some quirky responses to the question as well. Rubina for instance, thinks that her life is like Geet’s life, from Jab We  Met. She further adds that her friends also affirm this belief of hers since she can go anywhere at anytime. Another one of these was when another young man, quite like Shakespeare, who seemed like he had a flair for the arts, said that his life was like a play and associated it with an element of  performance and being ready to perform at all times.

There were two other young gentlemen who compared their lives to train journeys and trains. One of them even said, “meri zindagi hai express, but ek station pe rukti hai toh thoda der rukti hai.”

Whatever our perspective on life may be, I’m sure none of us can disagree on the fact that it is truly a gift. It is the flowers that spring brings along with it and the sweltering heat of the summer. It is also the coziness and yellowing leaves of autumn and the cold harsh winter wind.