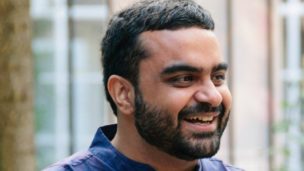 A feeling of finding solidarity in your collective identity? A safe un-closeted space where you can be yourself without any inhibitions? Owning up to your gender or sexual queerness and being proud of it? Being able to feel like you’re a part of a larger whole that accepts you for who you are and doesn’t want you to change, at all?

Akhil Katyal, a poet, a professor, a writer, and a translator, has been attending the pride parade in Delhi for the last ten years.

He recalls his first pride experience in an interview and narrates how back then the mere fact that he was wearing ten black bangles was making him feel conscious. He traces back his journey from the Vishwavidhyalaya metro station to the Rajiv Chowk metro station. He had wrapped a handkerchief around his hand to hide it but as soon as he reached Tolstoy Marg, he removed it and felt like he could be himself in that space.

There was that day and today is a day when Akhil Katyal is known for his two books of poetry, ‘How Many Centuries Does The Indus Cross?’ which won the and ‘Night Charge Extra.’ He is truly the queer icon that our generation needs and looks up to!

For all those, who are still caught up between the various possibilities of the consequences of coming out, we’re with you! It might not be easy and we understand that a lot could go wrong in the process and/ or as a result, but the amount of freedom and liberation you would experience is unparallelled to anything else.

PrevPrevious‘Now I call bullshit out’: Anubha on growing up as a bullied kid
NextIndia’s Fastest Woman Doesn’t Have To Run From Her Reality AnymoreNext